Me – “You see, I’m actually a story collector.”

I have been pushing my wonderful mobile bookcases of Readathon books around Evelina Children’s Hospital, GOSH, The Royal Free in London and The Royal Alexandra in Brighton for several years now and, on my travels, I have probably collected nearly a thousand stories. Some you’d recognise…“Someone is sleeping in MY bed!” – Ariana aged 5. Some that terrify!…“I saw scars, teeth, claws raging in my direction!” – Hamza aged 15. And some that delight!… “The sheep started floating into the sky and people thought he was a cloud.” – Ridwan aged 8.

It’s very simple. I share a couple of stories I’ve collected from other storytellers and then offer my new storyteller the chance to donate a story to the collection so that it can be told to another child in another hospital. Like all the best storytellers, they steal from each other’s stories; taking each other’s ideas and morphing them into their own. But what really amazes me is how these young storytellers use their stories to help them feel braver and stronger at what can be quite a difficult time. Hospitals can be daunting. The wonderful staff do everything they can to make the kids and parents feel safe and reassured but if you are only three, it’s pretty difficult to understand everything that’s going on and you may not have the words to explain how you feel.

I met Daisy at Evelina Children’s Hospital in London. She was three and just recovering from surgery. Her stories, inspired by simple pictures on some story cubes, explained very clearly how she felt about what was going on.

Once upon a time there was a lamb. A big witch came and trapped the lamb. The lamb got the key and opened it and the lamb was free. The lamb went back to it’s Mum’s house. Once upon a time the key was playing but a big Giant came and trapped it in a cage. He unlocked the door and then he walked back to his house. His mum hugged him. He had lots of balloons for dinner like the clown.”

Daisy had been playing, then she’d been trapped. What she wanted was to get the key and go home to her Mum’s house. The magic of these stories is that the tellers find resolution to all kinds of problems. They pit lambs against witches, fish against sharks and even teachers against aliens and when they see their heroes conquer the bad guys, they create hope and resilience for themselves. And most of the time… they just think they’ve told you a funny little story! It’s magic! 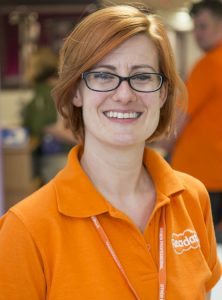